The Salem market 2020 year in review

The pandemic. The wildfire. Covid fatigue.  2020 has been a very long year.  I know that many people thought real estate would slow down with the pandemic, but here locally, we saw the exact opposite: home sales soared.  No one wanted to be trapped in an apartment all day long and buyers entered the market looking for some relief from close contact apartment living. 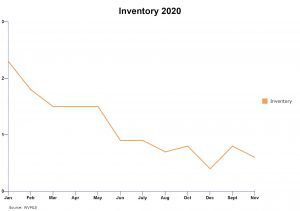 Inventory started being an issue in 2017.  There had been several stable years after the recession and buyers were feeling more comfortable in returning to normal.  All of the homeowners that had gone into foreclosure were eligible again to purchase and they re-entered the market.  As such inventory declined.  It was really 2019 when just a few weeks of inventory became normal.  The highest inventory in Salem this year was in January with 2.3 months of inventory.  We ended the year in December with 0.4 months of inventory.

In 2020, there were 3,063 residential non-acreage homes sold during the year which is a 5.5% increase over 2019.  It would have been higher if there were actually any homes to buy on the market.  It was a tough year to be a home buyer.  It was great to be a home seller if you already had a new home to go to. It took some coordination to have sellers go from one house to another home without having to rent in between their sale and purchase.

Days on the market

Homes were on and off the market with a 54-day median.  For buyers out in the market, that won’t feel right based on how fast things are flying off the market. That number represents from the time the listing hit the open market until the time that it closed escrow so that includes the loan process period as well.  When the interest rates started dropping, refinances went into high gear, and lenders were overwhelmed.  This is still the case and to close a transaction with a loan in less than 45 days can be tight.   There were also many sellers that wanted time to find a replacement property so homes were in the contingent period much longer than usual.  So this number doesn’t really reflect how fast homes go under contract.

What does all of this mean heading forward in 2021? More of the same.  I expect that if Congress repeals the 2017 tax cut, lenders will increase interest rates to compensate.  Biden also has a $15,000 first-time homebuyer tax credit in his tax proposal and whether or not that can get passed by Congress is unsure, but that would make the lower price points in Salem even more competitive, especially if that tax credit can be used for a down payment.  First time home buyers can often make the payment, but not save fast enough to participate in the market.  With rents as high as they are in Salem, it is often cheaper for renters to buy a home if they can, giving them more monthly income to either save or spend out in the economy.

If Salem isn’t the market you are interested in, you can read about other areas of the Salem metro market here.