Buying in a strong seller’s market

I get it.  You are feeling gouged.  The market so strongly favors sellers that you can’t help but feel it is grossly unfair.  Buying in a strong seller’s market might feel like your hard-earned money being thrown away due to bidding wars.  I am not without empathy for those of you having these feelings, but who still want to get settled and buy a home.  So how do you get over that so you can move forward and purchase a home?  Focus less on how unfair it feels and focus on the numbers.

When buying a home in a hot market, it is important to think about the finances as a whole package rather than focusing solely on the purchase price.  This is a risky market for someone wanting to live in a home for just a couple of years as we don’t know what lay ahead for us.  The Salem market isn’t being driven by a big tech company moving in.  Our market is driven by home buyers escaping from larger cities and settling here.  If you are buying a serious fixer, that is a different issue but that isn’t most buyers.  If your plan is to retire or live in the home for 10-15 years, you need to look at the long term picture of the costs associated with homeownership. 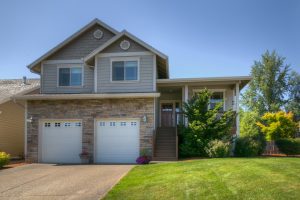 A mortgage paydown by the numbers

If you waited until Feb 2023 and the recession continued and home prices dropped a total of 20% so that same house now costs $320,000, but the interest rates are 6.24% which is what they were during the last recession (February of 2008), your monthly payment would be $1968.21 and you would pay $388,577 in interest over 30 years for a total purchase price of $708,577.  In the great recession, the median home priced dropped 26.6% between 2007 and 2012 in Salem for perspective.  Most of that was the fact that new construction homes came to a screeching halt and those are always more expensive homes.

A side by side comparison of a point in time

So if you buy now, one year from now, or two years from now, what might your mortgage payoff amount look like at the same point in time.   Where would you be with that house payment?  Now you have to live somewhere during that one-year gap from 21-22 and from 22-23 so if you include a $1500 a month rent payment for the one and two years that you waited…

So the way to not get gouged is to not think about it that way.  You will build equity faster with a higher price point and the low-interest rates than you will be having a 10 or 20% drop in home prices and pay a higher interest rate.  Of course, these numbers are all based on where interest rates will be. It isn’t likely that home prices are going to drop 20% AND interest rates remain where they are. The projection is they will be at 3.4% by the end of the year. You just have to look at the finances in the long term and not the short term.

I know it feels counterintuitive that you would actually be ahead financially by paying a higher price, but the current interest rates are so far below normal rates. Real estate is cyclical and you have to be able to ride through a cycle rather than trying to time the market.

If you don’t remember what it was like back in 2008-2009, I have a whole slew of market reports that I wrote about the foreclosure crisis.  This situation is different as it isn’t caused by lending issues, but by supply and demand.  Here are just a couple to help remind people that being unable to clear a mortgage was an issue back then.